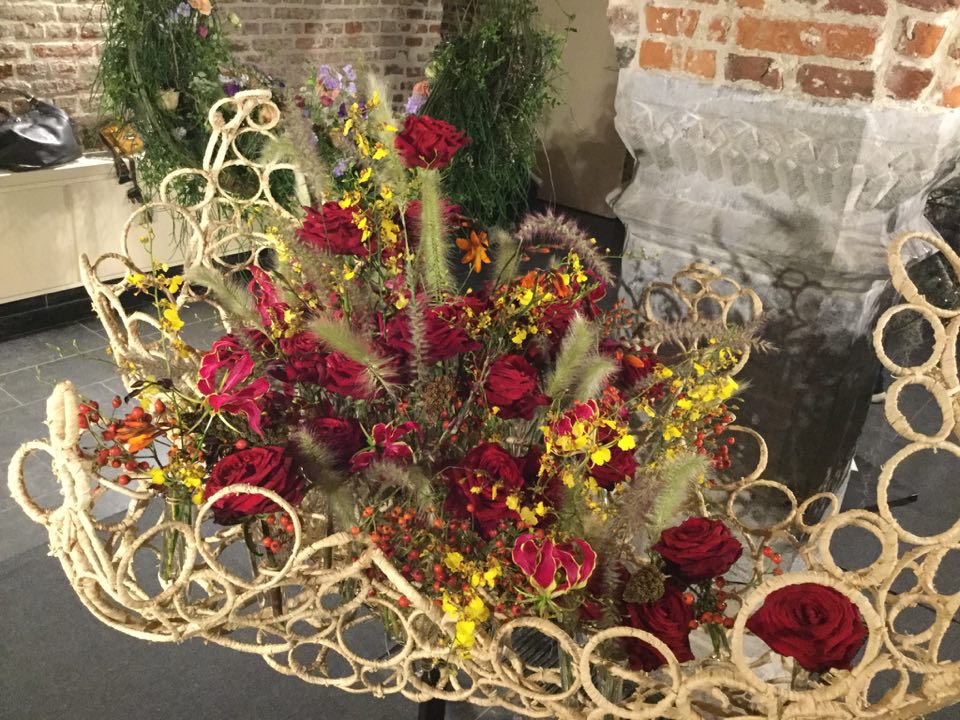 The theme for the 2017 edition of FleurAmour Passion for Flowers flower design event was ‘CULTURE’; where participating florists created floral expressions through the worldview and way of life of a people, and also through other values, customs and traditions of certain cultures. The event is traditionally held at the Commandery of Alden Biesen and features an impressive display of amazing and inspiring floral decorations. This is the 22nd edition of FleurAmour Passion for Flowers which saw many renowned florist drawn from various countries participating. All set to begin her task at Alden Biesen, Angelica Lacarbonara has a reflective moment with Porta Nova Supra Red Naomi roses to be used in her arrangements.

Tasked with decorating the Lower Bottom of the Castle was floral designer Angelica Lacarbonara. Angelica’s idea and project was called The Four Seasons of Antonio Vivaldi and she decided to use Porta Nova Red Naomi in creating her arrangements. She also created a gorgeous bouquet of Porta Nova roses.

This is what she said when asked why she chose Porta Nova red naomi roses; “In projects where I use roses, I choose one which brings out the needed authentic character of a red flower. “A first woman, a flower that leaves room for dripping and has a shape that is well defined with such beauty.” In making the arrangements, Angelica was assisted by six florists from different regions of Italy who had attended her school. This was an opportunity for her students to enjoy some hands-on work experience. These Italian florists were Michela Torti, Daniela Marchetti, Roberta Travaglia, Beatrice Virgili, Cristina Cosso and Laura Morelli.

The Summer Structure
The summer structure was designed in a large three-dimensional basket. Angelica and her team made the basket  with a number of aluminum rims covered with natural rays. Basket with aluminum rims for the summer structure Weaving the base together

Each circle was attached to each other to create the base. They used OASIS® Floral Foam and test tubes to hold the flowers in place. In addition to the Porta Nova roses they used oncidium stems, glorious, setaria and rose berries to truly represent summer colors. The initial structure was 4 semicircles made out of iron. The initial base for the Autumn structure The Bouquet
The bouquet was made with Porta Nova Red Naomi rose petals to create a bigger flower. The petals were attached together and placed on spiral silver wire to create the bigger flower and the cascade. Angelica used thin flexible wire to enable the cascading bouquet maintain its ‘flowing’ shape. Angelica then added some crystals for elaborate decoration. Detailed view of the Porta Nova bouquet by Angelica Lacarbonara Models with the various bouquet designs showcased at fleuramour. Angelica’s cascading bouquet design with Porta Nova roses on the right